Many people use the start of each new year as a time to get into shape or work toward a personal record (PR). At Iron Peak Sports & Events (formerly Apex), that would have been the plan for 2021. But with COVID-19, as with much of the world, this winter is different.

That’s not for lack of setting themselves up for success, though! The new 22,000-square-foot (2,043.9 m2) facility in Hillsborough, N.J., was completed in the summer of 2020, and for Triad Coatings, the local coatings contractor chosen for the job, the pandemic didn’t throw much of a curveball. Their gym goals started much earlier in the year as they were tasked with laying down a three-colored epoxy system over an extended Labor Day weekend. Could this six-person crew set their own PR? Iron Peak’s facility has four basketball courts, an indoor football field, an arcade, eight volleyball courts, a café, a climbing area, offices for employees, and a ninja course to boot! Getting the look right was crucial. That’s why, at the start, the client pivoted from a dyed polished concrete to an epoxy system — with Triad’s guidance, of course.

According to Nick Rossi, president of Triad Coatings, the polished mockup wasn’t vibrant enough for the client’s tastes. As a result, Triad made some samples to see if epoxy could fit the bill. “They fell in love with the vibrance and the colors of the metallic,” Rossi said. “They were looking for something that would go with the American Ninja Warrior theme, something that would work with the sports center, and something that would wear and tear for the sports facility itself.” The solution? A three-coat system from Simiron.

Because the building sits on what Rossi referred to as the wetlands, moisture mitigation helped his team ensure the slab was ready when it was coating time. They used Wagner Meters’ relative humidity (RH) probes to confirm those levels before applying the coatings.

Triad also relied upon new equipment from Midwest Rake. According to Rossi, the new EZ Squeegee lived up to its name: It was easy to change, easy to work with, and easy to clean.

For each layer of coating, squeegeeing was followed with a 1/2-inch (1.3 cm) soft woven backroll. All of that was to deliver a finish that matched the gym’s logo of mountain peaks, including a specific blue that had to be developed in the field. Simiron didn’t have that exact color, so Triad did a little mixing to get the right match. The new navy next to candy apple green and traditional aluminum gray made for a striking combo.

Getting the new concrete slab ready was not a walk in the park. Using 5,000 psi (34.5 MPa) power trowels and Scanmaskin 650 planetary grinders (purchased through Jon-Don), the crew worked to break the cap and give the substrate an International Concrete Repair Institute (ICRI) Concrete Surface Profile (CSP) 3–4. Rossi believes strongly in this surface prep method. “We thought about blasting, but I’ve had issues with blasting with metallics,” he said. “You see the cornrows, even with the 30 to 40 mils [762.0–1,016.0 microns]. You still see holidays, sometimes.” 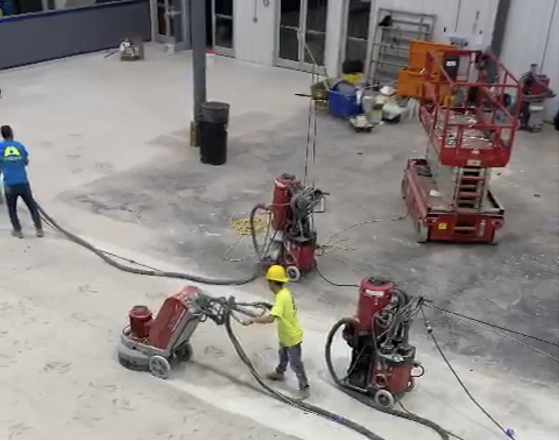 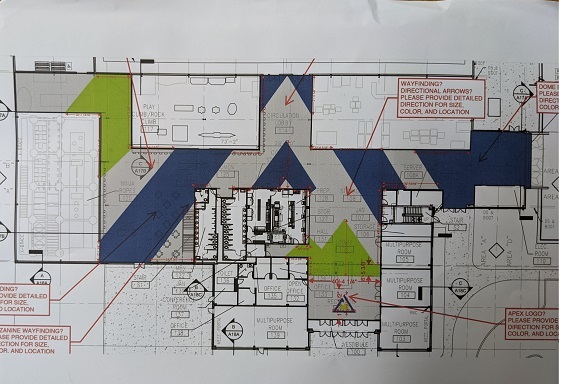 Because other trades were working in the area during this time, the Triad crew ended up having to redo this step not two, not three, but four times! “Every time we ground it, we walked away and somebody else brought a lift on top of it,” Rossi explained. “So then we had to re-grind it. … It was very frustrating and annoying at the same time.”

When working with the coatings themselves, Rossi had a few other tricks up his sleeve. Those started with using yellow delicate FrogTape around any carpeting, platforms, and coving. The client needed to get their certificate for occupancy before the crew arrived onsite, and that meant that the Triad crew had to work around an already installed 4-inch (10.2 cm) vinyl glue-and-stick coving. “We had to cut around all of the vinyl cove base, which made it very interesting,” Rossi said.

To get those clean edges of the “mountains,” the crew used saw cuts instead of tape. Applying the aluminum first, they flooded to the joint, following with other colors on day two. Rossi said tape isn’t enough to get a crisp line between the different colors. “This way, we saw cut on the design and had beautiful crisp lines all the way throughout,” he said. “On top of that, a little denatured alcohol to make sure there was no outgassing and to lay out the metallic to give it a little 3D dimension to it,” he continued.

On the Triad team, each person gets a dedicated task for consistency. For example: “Everything was mixed by the same person, [using] the same concept, the same system to avoid any pigment flow issues or mixing issues with the resin itself,” Rossi said. They also kept all coatings inside “so the material was the same temperature as the space, to avoid any outgassing or drying issues,” he explained. This turned out to be a blessing and a curse.

On one hand, Rossi “mandated that they had their permanent HVAC [heating, ventilation, and air conditioning] system in place due to the metallic going down.” That meant the concrete had a chance to “acclimate” before Triad started coating. On the other hand, that also meant the Triad team had to wait till the HVAC crew was done, and they were running behind schedule.

Another Triad crew member of note was the edge cutter. According to Rossi, you can’t just have anybody prepping the edges. “You’ve gotta have somebody who knows how to actually do it,” he explained. “You’re not just running a diamond across the edge, there’s a technique and a little finesse to it.”

To stay in the groove, Triad’s edge worker used a 5-inch (12.7 cm) hand grinder from Metabo and a RACATAC wheeling chair. “He just loves that thing,” Rossi joked. “And that’s all he does.”

During prep, crew members wore 3M half-face respirators and ear protection. In general, they also wore air-resistant pants, steel-toed boots, and hi-vis shirts or vests. Everyone at Triad is 30-hour Occupational Safety and Health Administration (OSHA) certified, and on this job, the team also communicated on a weekly basis with other subcontractors.

Since this project took place during COVID times, temperature checks were required at the start of each shift, and those were reported to the general contractor, G. Williams Group. Safety also included using Triad-supplied cloth face masks when not wearing respirators and limiting crew numbers to help with social distancing, whenever possible. “Luckily, we had a weekend to ourselves where it was only Triad employees, not comingling with anybody else,” Rossi said. Although gyms in the area are still currently closed due to COVID precautions, Iron Peak was able to be open for a few months after it received its new coatings. They let the floor cure for 48 hours before putting Timaco’s Floor Shell on top. After 72 hours total, the client and the other trades were able to walk on the floor. “They were rocking and rolling,” Rossi said.

The result? “They love it, they absolutely love it,” Rossi said. “Iron Peak is a national company, so I’m hoping this is the new national spec for them.” Until they can return indoors again, we’ll have to view it from a social distance.